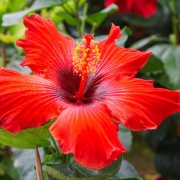 This wonderful red flower is a native plant of tropical countries.
It is believed to have originated in India and Malaysia and from there, it has been transported to Africa for thousands of years.
Hibiscus is an ornamental and medicinal flower. The authentic tropical hibiscus has red flowers.
Older botanists have suggested that Polynesian migrants may have brought hibiscus with them from Southeast Asia.

So hibiscus was found in Hawaii, Tahiti, and Fiji. In these exotic countries, hibiscus was associated with many habits in the life of the inhabitants. Thus the flower became the emblem of Hawaii.

It is considered that:

Our hibiscus room is a Superior 17sqm that has an exotic essence from places far and enchantingly harmonized in Pelion today with a sea view that will calm you down. 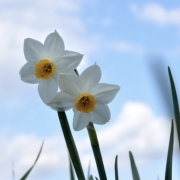 Perhaps the most appropriate way to attribute the beauty of the Narcissus flower is this ancient Greek myth.

Narcissus was an extremely handsome young man.
His mother had told him that he would stay that way for the rest of his life if he did not pay attention to his beauty.
Narcissus decided to see one day his reflection in the waters of a spring.
He was so fascinated by its beauty that he remained motionless admiring himself until he withered and died on the banks of the spring.
According to another version, he thought that his reflection was the nymph who lived there. He jumped into the water to catch her and drowned. A flower grew there and that was Narcissus.

Narcissus is a beautiful room bathed in light, a superior room overlooking the sea, ready to welcome you in its warm atmosphere.

Comfort and special decoration are evident in this room. The superior rooms, 17sqm each, one located in the & 2 the floor of our hostel and for this reason the view from the balconies is breathtaking. 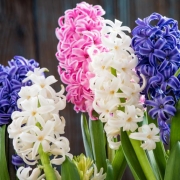 In Greek mythology, a beautiful young man from Amykles (a city in Laconia, near Sparta), a friend of the god Apollo, is known as Hyacinth, whom the god accidentally killed by throwing the disc.

Apollo dug himself with his hands the tomb of Hyacinth and from his body or blood made the plant and flower of the same name grow for the first time. On the leaves of this plant it was said that the letters ΥΑ or ΑΙ were distinguished, which were interpretively associated with “ΥΑκινθος” or “υΑΚινθος”.

In honor of Hyacinth, the Laconians celebrated the feast of Hyacinth, while many bronze statues of him are preserved. Celebration that symbolizes the death and rebirth of Nature and man, death and resurrection.

Mozart wrote the opera “Apollo and Hyacinth” (1767) with a hypothesis from the myth of Hyacinth.

Hyacinth is extremely fragrant while it has its flowers in the shape of a bell.

Our room Hyacinth is one of the Superior. The chic bright, cool and at the same time so intimate feeling, makes it one of the favorite rooms of our customers. The superior rooms, 17sqm each, one located in the & 2 the floor of our hostel and for this reason the view from the balconies is breathtaking. 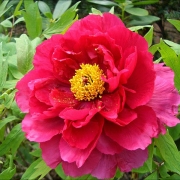 The peony is the queen of flowers and is a symbol of love and good luck. This romantic flower keeps lust and love alive.

Her beautiful flower most often adorns the bride’s bouquet.

It is believed that the peony got its name from Peony or Peana who seems to have been a deity of healing since he had healed Hades and Mars from wounds.

Peony is our room that inspires love, lust and eternal love. A Superior room, overlooking the endless blue that inspires romance and tranquility for the days that will host you … and has the possibility of a sofa bed. 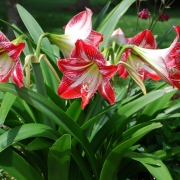 The symbol of majestic beauty and determination!

This flower was associated by the ancient Greeks with a myth, the myth of Amaryllis and Altaion.

In the language of flowers, amaryllis symbolizes radiant beauty,

Amaryllis room is a comfortable room with sea view and fireplace ….. making it the perfect winter and summer getaway ….!

Comfort and special decoration are evident in this room. The superior rooms, 17sqm each, one located in the & 2 the floor of our hostel and for this reason the view from the balconies is breathtaking.

Upstairs (accessible only by stairs)

Upstairs (accessible only by stairs)

The double room, 14 sq.m., can accommodate up to 2 people
ΠΕΡΙΣΣΟΤΕΡΑ

The beautifully decorated room, 14 sq.m., is located in the 2nd building of the complex
ΠΕΡΙΣΣΟΤΕΡΑ

A wooden house scattered in the botanical garden of Iris Guest House is offered for those who are looking for a way to live as close as possible to the nature of Pelion.
ΠΕΡΙΣΣΟΤΕΡΑ

Luxurious suites with comfort, size 40 sq.m., have a living room with fireplace and column - whirlpool can accommodate from 2 to 4 people
ΠΕΡΙΣΣΟΤΕΡΑ

The Junior Suites of the hotel, size 20 sq.m., will become your romantic refuge
ΠΕΡΙΣΣΟΤΕΡΑ

The family room, size 25sqm can accommodate from 2 to 4 people
ΠΕΡΙΣΣΟΤΕΡΑ